Risk-Taking - Going Out on a Limb Requires a Nimble Personality 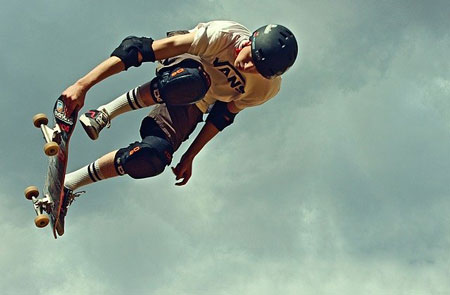 Running a quick search on risk-taking quotations will reveal that the wise, the artistic, the leaders, and the innovators consider risk-taking a necessary part of life. Of course, none of these people would have been considered wise, artistic, leader or innovator if they hadn't been willing to take chances in the ﬁrst place. But every creature, to some degree, takes chances in life. "Behold the turtle," counsels James Bryant Conant. "He makes progress only when he sticks his neck out."

Being risk-avoidant has its beneﬁts, of course. People with this proﬁle are less likely to bring harm to themselves or to others, are less likely to make rash decisions and consequent mistakes, and less likely to fail. On the ﬂipside, they're also not likely to attain great achievements, have memorable experiences, and achieve those dreams that are locked up tight on a shelf at the back of their mind. Extreme risk-takers can be reckless, dangerous, and put their body and ﬁnances in peril. But to risk nothing is to achieve nothing. Thankfully, there is a happy medium.

According to PsychTests, calculated risk-taking involves a careful balance of Sensation Seeking, Harm Avoidance, Conscientiousness, Locus of Control, Comfort with Ambiguity, and Reward Orientation. PsychTests' data, collected from over 7,000 test-takers, reveals that most people are moderate risk-takers. Moreover, judging by a high mean score on Reward Orientation (72), people are more likely to chase rainbows if there's a nice pot of gold at the end.

Gender differences reveal interesting, although perhaps not surprising, results. Men were shown to be more likely to take risks (overall score of 57 vs. 52 for women, on a scale from 0 to 100), to be sensation seekers (59 vs. 53 for women), to be more comfortable dealing with the ambiguity of risk-taking (59 vs. 55 for women), and had a stronger reward orientation (76 vs. 69 for women). Women, on the other hand, were more likely to want to avoid harm (50 vs. 47 for men) and more conscientious (61 vs. 58 for men).

"The results of our study are in line with much of what past research shows - that men tend to have a higher propensity for risk," indicates Dr. Jerabek, president of the company. "Some theorists believe that women's risk-taking behavior (or lack thereof) has an evolutionary link. Women are more likely to be the ones taking care of others - putting themselves in danger places those they care for in danger as well. This is reflected in our data, with women's tendency to be more likely to want to avoid harm, and to be as cautious as possible. In fact, the majority of test-takers who indicated that they have been in 'more than 7 car accidents' and have had 'more than 7 bones broken' were men."

In terms of age, PsychTests' data shows that younger age groups have a slightly higher tendency to take risks. Sensation seeking decreases with age, while conscientiousness, harm avoidance, and internal locus of control increase with age. Those who are 40 and older are more comfortable with ambiguity, while the 18-29 year olds are more oriented towards reward.

"In the business world, as in life in general, risks shouldn't be all or nothing," explains Dr. Jerabek. "Calculated risk-takers, like entrepreneurs for example, are very comfortable taking chances and dealing with the ambiguity of it, but they also have a healthy dose of conscientiousness. If employers need to fill a position

that involves taking risks, they should look for the right combination of risk-taking traits in the candidates. People who are very harm-avoidant may be too inhibited to take risks, while sensation seekers who lack forethought will be too much of a liability. It really is a delicate balance."

PsychTests' Risk-taking Test offers valuable information about a person's propensity for risk"taking, his or her level of care and control when taking risks, and the level of responsibility he/she assumes for the consequences of the risks taken. Based on how individuals score on primary risk-taking personality traits (Sensation Seeking, Harm Avoidance, Comfort with Ambiguity) and mediating personality traits (Conscientiousness, Reward Dependence, and Locus of Control), an overall risk-taking personality profile is generated, allowing manager's to determine whether a person is likely to take reckless risks, calculated risks, or no risks at all.

Effective risk-taking is a delicate balance of different key traits. People who are prone to risk"taking can either be a benefit or a liability to a company, making personality assessments a crucial part of the hiring process.